The third alphabet of the Belarusan language

Read this acticle on Medium

Be­la­ru­sian lan­guage is one of the world's lu­cki­est lan­gua­ges to benefit from three independent scripts (Latin, Cyrillic and Perso-Arabic). Belarusan Latin alphabet

An example of the Belarusian Latin alphabet: Yanka Kupala’s poetry collection “Huślar” ‘a harp bard’. Pieciarburh (Petersburg), 1910. Continue to the full text or read contemporary Belarusian Latin texts. has been popular during and after the 19th century, used by classic writers such as Vincent Dunin-Marcinkievič, Francišak Bahuševič, Tsiotka, Yanka Kupala as well as by the most popular periodicals like the newspaper Nasha Niva (still exists) and Konstanty Kalinowski’s “Commoner’s truth” (Myżyckaja praŭda) intended to be read by the most vast circles of population.

The Belarusian Arabic alphabet (Arabica [arábitsa]) was brought into use in the 16th (possibly 15th) century by the (Lipka) Tatars, who had been invited (by Grand Duke Vitaŭt due to his treaty with khan Tokhtamysh) to settle in Belarusan territory, at the time part of the Grand Duchy of Lithuania. During the 14th–16th centuries they gradually stopped using their own language and started using the Old Belarusian language rendered in Perso-Arabic alphabet. At that time, a diglossic environment was spanning across the Belarusian territories: while the vernacular speech of the people was Ruthenian (a.k.a. Old Belarusan, a.k.a. Old Ukrainian, self-name próstaja móva “simple talk”), the written documents were established in Church Slavonic (more precisely, in its Ukrainian-Belarusian recension). The Tatars, Muslims, spoke (Old) Belarusan and at the same time were not constrained to use Church Slavonic language in writing: they phonetically depicted their speech with the letters of Perso-Arabic alphabet, thus producing over centuries a corpus of (Old) Belarusian texts. 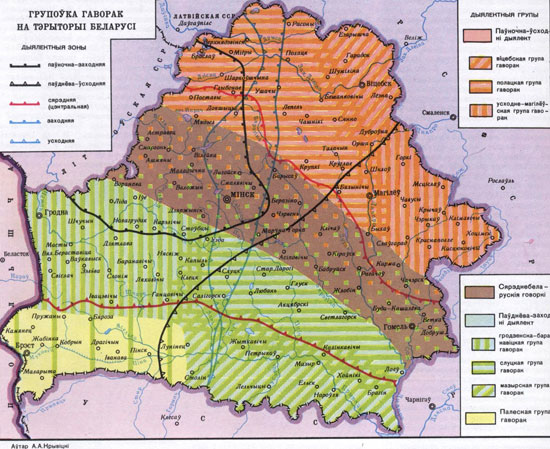 See the map of Belarusian dialects «dialects.natatnik.by». Or read more about the Belarusian Academy of Sciences’ dialectology expeditions at philology.by. Those texts are precious because they capture the live Belarusan speech of that time, demonstrating many of its particular features (akańnie, dziekańnie, ciekańnie, lexicon choice), while the other texts of that period drone on in Church Slavonic. In many cases even phonetic peculiarities of the writer’s dialect are reflected.

Books of that literary tradition are known as Kitab·s (Belarusian: “Кітаб”), which is the Arabic word for book. Kitabs contain Oriental legends, fables, adventure stories, descriptions of rituals, the so called “Meradj” (a poem about Muhammad’s ascension), narratives for young generation about moral and ethical behavior, fortune-telling on letters, interpretation of dreams. Apart from kitabs there also other related books: tefsirs (تفسير, Belarusan and Polish qur’anic parallel commentary), tejvids (تَجْوِيد, the rules of liturgical reading), hamails (special prayer books).

An example of a text is given below. It comes from the hamail of Ya. Yakuboŭski, p. 389. The parsing steps are shown: 1) The original manuscript (p. 389) with no punctuation marks. 2) Typographically cleared text in Belarusan Arabic alphabet, 19th century. 3) Transliterations in Cyrillic and in Latin. 4) Modern Belarusian, in Cyrillic and in Latin 5) English translation.

Transliteration into Cyrillic and Latin

And that’s how you should raise your cattle: every year on Maundy Thursday, go to the forest, chop a linden tree and rip off its bast. Put that bare linden stem into a tree hollow, beware not to moisten the stem. Take the bast home with you, hide it in sight (sic). On the very Easter, take it away, make knots and while tying it, say: … (further follows the spell)

Drawbacks of the script

While being widely used to write Belarusan texts and even adapted to the Belarusan language (invention of special letters dz’, c’)

Two specific Belarusan phonemes [d͡zj, t͡sj] could not be depicted with Perso-Arabic letters, so the Ruthenian- and then Belarusan-speaking Belarusan Tatars, citizens of the Grand Duchy, fashioned new letters from the most similar existing ones., the Belarusian Arabic script has not been standardized. The drawbacks are as follows (A. Antanovič, Belarusian texts, written in Perso-Arabic script, and their graphic and orthographic system. — Vilnius, 1968):

There has been an initiative by Yevlampiev et al to incorporate the distinctive letters of the Belarusan Arabic alphabet into the Unicode standard. It is now an accomplished deed.

This site’s aim is to promote and to bring into use Belarusian Arabic script. This initiative will eventually produce a didactic package for the Belarusan Arabic script:

— A thorough and scientifically motivated exposition of the specificities of the script and an explanation of how it fits (or not) the Belarusan phonetics;
— A primer for the speakers of Belarusan;
— A reader.

We interchangeably use ‘Belarusian’ and ‘Belarusan’ on this very page. Both are valid adjectives (Glottolog, WALS, sidebars “Names”).

The third alphabet of the Belarusan language - May 9, 2019 - Maxime Seveleu-Dubrovnik